From when the biggest natural calamity in living memory struck the country on April 25 last year, the number one priority of the Government of Nepal and the rest of the leadership should have been rehabilitating the victims.

But, for the leadership of Nepal, it was then and still is business as usual: create smoke screens and keep the population distracted.

In early June, the drafting of the constitution became the first smoke screen when the four major political parties agreed to “fast-track” it after over six years of dilly-dallying.

To the list of unflattering adjectives I use to describe our political leaders, I have one more to add: insidious!

India became the other smoke screen when it imposed an unofficial economic embargo in late September in response to the protests against the constitution in the southern plains. By that time, the earthquake victims had been left to their own devices for five months already, including three months of monsoon season!

While Nepalese social media users responded with #BackOffIndia campaigns, amused and bemused in equal measure by what I was seeing, I chose to be a party pooper.

On September 23, to point out the ridiculousness of the campaigns, I shared the following matching game on Facebook. (No prizes for getting it right! 🙂 )

Want to play a game?Match the following change dot org petitions about Nepal with the number of signatures so…

And on September 28 when I came across the absurd decision by the Association of Cable TV to stop transmitting Indian channels, I had this to say.

Why stop there? Why take half measures? Why not ban EVERYTHING Indian — and EVERYTHING through India — from coming…

How long do you reckon that decision lasted? I don’t know. But I am willing to bet that it did NOT last as long as the embargo!

At about the same time a man of great moral courage and integrity was putting his life on the line for a greater good. And on the same day as the post above, I chose to highlight him instead.

Dr. Govinda KC's status. Support those fighting for greater good in Nepal rather than expending energy on those outside the country ostensibly conspiring to destabilise the country. #IamWithDrKC

On November 1, when the Independent Citizens of Nepal called on India and the Government of Nepal to address the blockade, I had this to say.

(It’s entirely possible that the same Independent Citizens may have also called on the leadership and the Government of Nepal to tend to the victims of the earthquake at a different time. I may just have completely missed it.)

On the same day, trying to highlight the plight of the Madhesis protesting in the south, I had this to say which resulted in a long exchange with a few friends. (You’ll have to click here or on the time stamp or the Facebook logo below to read the exchange.)

Following that exchange, on November 5, I even blogged about the need to turn our attention to the ineffective government instead.

Then on November 17, I shared the following sentiment.

I have said this before and I'll say it again: what's broken in Nepal is our Government, our system. Blaming others –…

Interestingly, a while ago, a Facebook friend, having noticed my lack of India-bashing, decided to call me out, and attempted to get me on the bandWAGon! 😀 It led to a few amusing exchanges which I reproduce below.

(Incidentally, the photo below is that of motorcyclists queueing up for gas (petrol). Please note that I have redacted his/her name since the point of this post is NOT to humiliate him/her.) 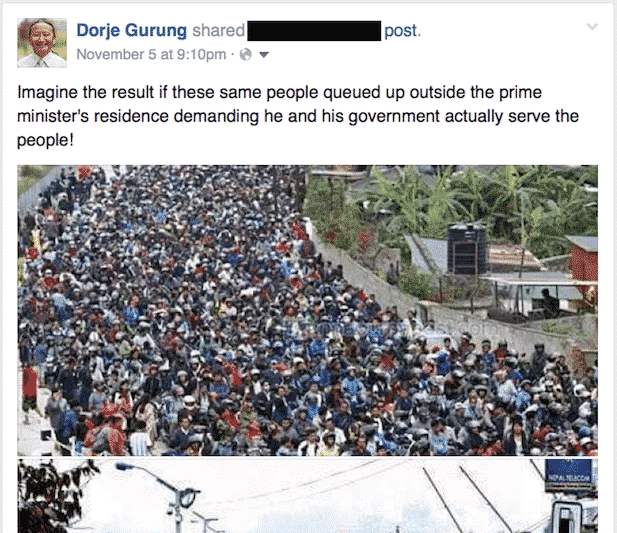 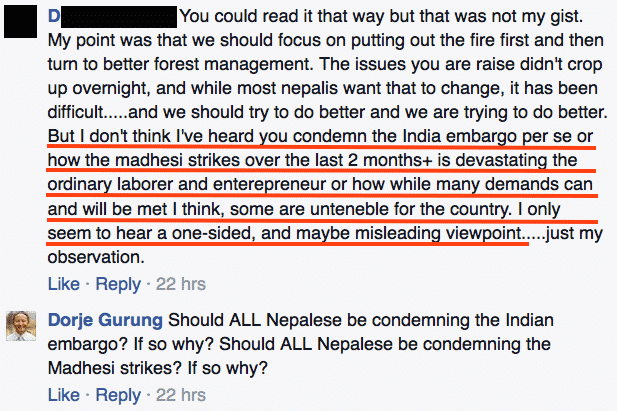 Unfortunately s/he stopped too soon! 🙁 I would have had so much more fun had s/he continued! 😀

And while s/he might have failed in his/her quest, judging from the passion with which the Nepalese media and Nepalese social media users continue to expend time and energy condemning India and others and, in the process, inadvertently supporting the government and our political leaders, I would say our leaders are succeeding, sadly.

What’s more, recently the Government of Nepal added to that list the International Crisis group for its damning crisis report, and also the EU for its joint statement with India in which the need to address the outstanding constitutional issues was referenced.

I couldn’t help but notice and share the following observation.

Judging from the fact that the Prime Minister himself is not satisfied with the progress made with the number one priority — rehabilitation of the victims of the earthquake — almost a year after the calamity struck, I would say that our leadership is succeeding…in their game plan!

Judging from the fact that our leadership is not paying much attention to the second priority — resolving the issues with the regressive constitution promulgated on September 20 — I would say that they are doing really well.

(Of course, promulgation of the constitution shouldn’t have been a priority last summer to begin with as was already hinted at earlier, but that is a whole different story.)

Having said that, to clarify my Facebook comment about queueing up outside the Prime Minister’s residence, to pre-empt any accusation of endorsing violence…. My suggestion was for making a peaceful, non-violent demand on the government, no different from what I have done in the past.

I’m not satisfied with pace of reconstruction works: PM Oli

Additional Links Not Referenced in the blog:

Middle Class Mirage. “Many in Kathmandu were not aware of the events in the Madhes until the blockade hit them.”

Lose the yam. Nationalist elite would do well to reflect on the true meaning of sovereignty.

ज्वाइँबाट अभिशप्त नेपाल ? Or those foreign sons-in-law to be precise.